Ty Hyderally is an expert in employment law in New Jersey and New York. He was first drawn to this area of practice because of its complexity. He has successfully litigated employment law cases in the courts of New York and New Jersey. Because of his vast knowledge of employment law and his years of successful litigation he is highly respected by his colleagues in the legal community. Because of his expertise he spends much of his time conducting various types of seminars in which he educates employees and employers regarding their rights and responsibilities pertaining to employment laws in existence on both the local and national levels.

Mr. Hyderally speaks frequently on the corporate level to help them develop the proper procedures so that they can create and maintain a safe work environment which is free from discriminatory practices. By educating at the corporate level Ty Hyderally helps businesses avoid litigation procedures in many instances. He frequently makes speeches and holds various forms of training for corporate entities, human resource personnel and speaks to employees as well as employers. His goal is to educate corporate officials, business owners and employees about matters concerning employment law so that they are aware of the various rights and responsibilities each has in order to keep the workplace free from any type of discriminatory or illegal employment activities. His accomplishments include writing and publishing handbooks as well as employment manuals for specific businesses.

Mr. Ty Hyderally has also compiled and implemented complaint procedures in order to prevent companies from having to endure time consuming litigation procedures. Having standard procedures which can handle complaints properly can avoid situations that require legal actions. He has expertise in the many facets of employment law. He has handled a wide variety of cases and litigated for both employees and employers. His experience includes cases dealing with family medical leave, sexual harassment, employer-employee relations, and cases in which there has been retaliation.

Mr. Hyderally has also handled cases dealing with various types of discrimination in the workplace including gender, age, and race discrimination. In his repertoire there are also employment law cases which required litigation pertaining to rights covered under the ADA, restrictive covenant claims, breach of contract and wage and hour discrepancies. Mr. Hyderally has a vast knowledge of employment law and he works diligently to inform his clientele and to protect them. His broad knowledge allows him the opportunity to share with corporations and businesses on a wide variety of employment law topics. He speaks from his many years of successful experience in both the state courts of New Jersey and New York; and the federal courts. There are several honors that Mr. Hyderally has received of late. He was greatly honored by being listed in the Top Ten Employment Litigators in New Jersey. He has been shown this honor because he is highly respected by his peers in the legal profession because of his aggressive and successful litigation on behalf of his clients. And he was awarded this honor due to his many years of litigating successfully in the court systems.

Over the years that Ty Hyderally has been involved in the legal field, he has been awarded the opportunity of serving in various prestigious positions. One of his appointments was to the position of president in the New Jersey Chapter of the Executive Board of the National Employment Law Association. This particular professional organization is the largest organized group for plaintiff employment lawyers located in the state of New Jersey. The Tribal Advocacy Committee of the American Bar Association Employee Rights and Responsibilities Section also appointed him to serve in the capacity of chair person for their organization. Mr. Hyderally has served many different positions which demonstrate his serious commitment to trial litigation. One of his honors was to be nominated to serve as a Co-Chairperson of the Trial Litigation Sub-committee of the ABA’s Labor and Employment Litigation Section.

Ty Hyderally received his JD as a graduate of the School of Law of the University of California, Berkeley. He also obtained his B.A. when he graduated from John Hopkins University with Honors. He set up his own law firm, Hyderally and Associates with law offices in two locations: New York, New York and Montclair, New Jersey. He has gained expertise in the field of employment law pertaining to some of the region’s specific laws regarding employment practices and procedures. He litigates on behalf of those who work in the New Jersey area and are subject to the local New Jersey Law against Discrimination (LAD). He also works with businesses and employees to ensure that the citizens of New Jersey comply fully with the New Jersey Family Leave Act (NJFLA). He is an advocate for citizens in the area and diligently serves them by providing educational services which help keep discriminatory practices out of the local workplace. He presents pertinent information to various corporate groups which helps bring understanding about the things prohibited by LAD. This includes discriminatory actions which are based on a person’s religion, sexual orientation, and marital status, race, color, gender or age. He also litigates for individuals who need to take a leave of absence from the workplace to tend to an illness of an immediate family member, or the birth or adoption of a child. These are rights that are provided and protected by the NJFLA.

Ty Hyderally has also litigated in other states for issues dealing with employment law in Texas, California and Arizona. He also had the opportunity of litigating several class action cases on a national level as well. Mr. Hyderally conducted arbitration before both the American Arbitrations Association the New York Stock Exchange and the National Association of Securities Dealers, Inc. And he had the honor of serving as a judge in the National Employment Moot Court competitions.

Attorney Ty Hyderally has been included in the Ten Leaders of Employment Law in Northern NJ and concentrates in Employment Law. In August 2006 he was included as a New Jersey Super Lawyer. He holds a B.A. from Johns Hopkins University and a J.D. from University of California at Berkeley.

Mr. Hyderally is an active litigator admitted before the New Jersey State and Federal Courts, the New York Federal Courts, the US Supreme Court, the Court of Appeals for the Armed Forces and has published opinions in employment law before the New Jersey Appellate and Supreme Courts. He was elected to serve on the Executive Board of the National Employment Law Association (NJ) and was appointed as its Treasurer. He is part of the American Bar Association (Labor and Employment Section) leadership as a Section Co-Chair. He was also elected to serve as Co-Chair of the Trial Advocacy Committee of the American Bar Association Employee Right’s and Responsibilities Section.

Mr Hyderally represent employees in harassment and discrimination cases based on race, religions, age, gender, sexual orientation and other discriminatory cases. Ty Hyderally is now a proud memeber of The Lawyers of Distinctions. 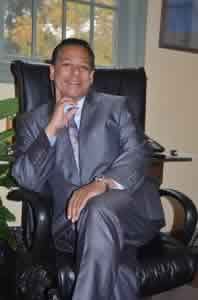 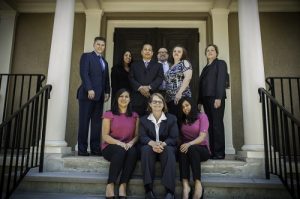 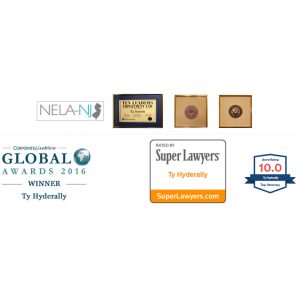